A father was a passenger in a car that hit and killed his 12-year-old daughter on a road near their family home.

Abbie McLaren was knocked down on The Loaning in Motherwell, North Lanarkshire, at around 4.15pm on Tuesday shortly after getting off a bus.

Her father, John, got out of the car straight after the crash and ran over to the victim to try and help, before realising in horror who it was. 'He just stood there completely frozen, he couldn't move or say a thing,' a witness told the Daily Record.

The witness said Mr McLaren was in the car with a male driver, who tried to get medical help.

'The driver ran back up to where it all happened and just kept shouting, 'Does anyone know CPR?'' he said.

Abbie, a pupil at Dalziel High School, was treated by paramedics at the scene and then taken to the Royal Hospital for Children in Glasgow, where she died.

Police said a 38-year-old man has been arrested and is due to appear at Hamilton Sheriff Court today.

Cousin Amber White, 18, said: 'She loved having a laugh and being goofy with everyone. Abbie was really clever but most of all, she just loved spending time with family and friends.'

Tributes to Abbie were left at the crash site, including a shirt signed by her friends and bouquets of flowers.

Members of the community have launched a petition calling on North Lanarkshire Council to introduce traffic control measures on the road. 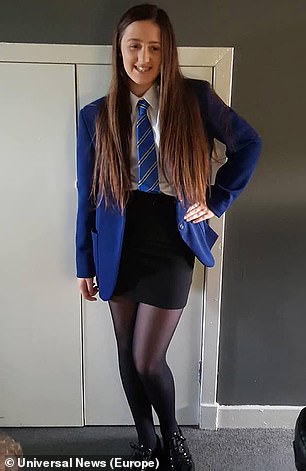